All You Can Carry

Boy, time just flies by here like lightning!  Just about the time I thought I might have more to post about, Life throws a monkey wench in it all.  About 3 weeks ago, Fred (my elderly neighbor) had a small stroke and Allen and I have been very busy since taking care of him.  I take mornings up until about noon and Allen takes over from there. Of course, it varies and some days I end up going up there well into the night.  But then it's reversed some days too.  Fred is doing better but still needs help with some meals, washing dishes and laundry and taking to doctor's appointments.  Some days I don't have to do too much but then some days (like today) I was up there for quite a while.  I don't know if I ever mentioned it on this blog before, but Fred is also a notorious hoarder.  Something that afflicts many folks these days.  Allen has asthma and I have bad allergies, so it's a struggle for the both of us to say the least.  We've kinda made a dent in the worst of the filth though, so it's slightly better now.  Well, rats don't jump out of the kitchen drawers at you anymore, I'll say that.

So, I am still trying to get more into doing my art and have actually opened an Etsy shop.  It's small now but I hope to add more soon.  I've included a few photos of some fun little things I've done lately.  Now, these are not any kind of high art and I don't pretend for them to be.  It's just something fun that I've enjoyed doing.  And it helps me practice with the idea of taking random scrap and making them into totally unrelated objects.  They are very much like puzzles and it helps my brain and thinking processes. 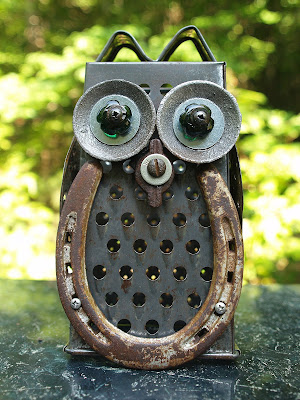 Finding these old vintage cheese graters is actually quite a challenge nowadays.  I've managed to locate a few. 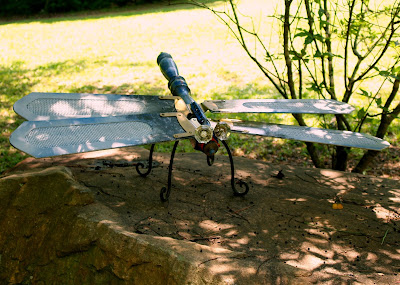 I really like the big dragonfly.  Most people show these hanging on walls (like on Pinterest) but I like mine standing on legs!  I don't know....makes him seem more ready to fly away or something. Ha! I like his little curled up feeties too.  Did you know that a real dragon fly cannot walk?  Their legs are only for standing and grabbing.  They can't actually move them in a walking motion.

Before Fred had his stroke I had also managed to do a bit more work on the kitchen, running all the backsplash tile and pouring the last bar top counter top.  I'll try to post photos of that soon.  I looks great.
I've been keeping up my running and exercising but have not entered any more 5Ks.  I hope to do that but they've either been too far away, too expensive or in the morning and my mornings are spent with Fred now.  At any rate, I need to do the running and exercising no matter what.  I've been doing a lot of yard work also.  Since switching to the Sinemet I have been feeling better for the most part, although I still have a bad day every so often and I still have issues with driving very far. One great thing is that my right shoulder has started to loosen up!  I've been to the Doc about it and he said it was "frozen shoulder", which happens with some Parkinson's folks (and others as well), and it had gotten pretty bad.  I really had a lot of trouble showering, washing my hair etc.  But since starting on the Sinemet it's slowly loosening up and today I was actually able to do 3 sets of tricep dips in my workout!!  Yay!! something I've not been able to do in a very long time.  Unfortunately, I've been quite tired since I've been helping Fred out so much and my tremors are noticeably worse on some days.  If I get tired or upset they start up real bad and that's been an issue but hopefully things will improve and I can get a little more rest.

I will try to post again soon but ya'll know I say that every time and then never manage to! ha!