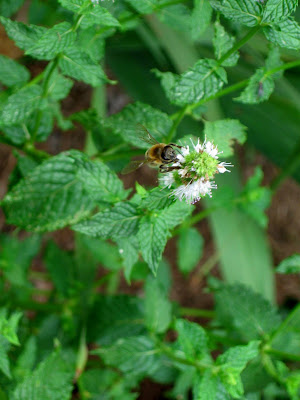 Since Blogger has now made it near impossible to tell in what order your pictures are going to appear on the blog I am just going to start writing and maybe that title will make sense later! With this many pics I don't feel like trying to straighten them out. When I left you in the last post I was going out to dig potatoes, and we did. I have spent a lot of time in the garden the past couple of days actually, harvesting a number of things and I took a bunch of photos of what I saw. I have had a miraculous surge in the number of honey bees visiting my place!! The corn has just been swarmed with them but I couldn't get a good picture to save my life. So, I snagged one on the peppermint. I am just SO happy to see so many of them in my garden. 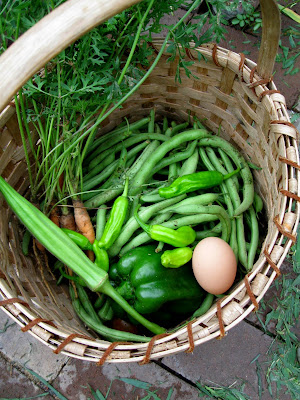 I have been very happy with some of the harvests so far and disappointed with others. I guess that's normal. This is what I picked today. There's a good bit of okra on the bottom that you can't see and I picked a good mess day before yesterday. For you non-Southerners, a "mess" is a description of volume or quantity. A mess is generally the amount that would make a good serving for a couple of people but it can vary. 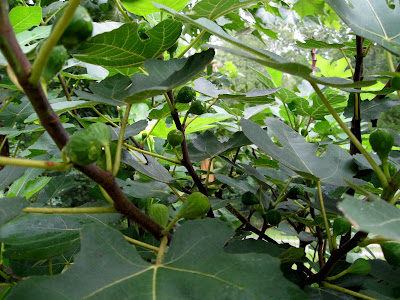 The figs are actually doing well this year, at least so far. Hopefully, these babies will mature this year into sweet goodness. Both trees have quite a lot of buds. 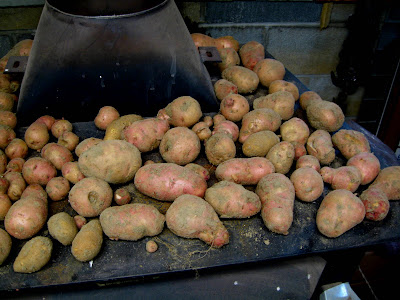 So, to the original title. Jack helped me dig the taters. I don't think he enjoyed it. Well, it was hotter than hell, even at 8:00 a.m. and the humidity here has been like, 99% so it was not a lot of fun. I was happy that there were even potatoes to be dug and nothing had eaten them or spoiled them. I only dug the Red Pontiac and left the Goldrush in the ground to get a little bigger. Of the Red Pontiacs, we got 16 pounds. I was a little disappointed to say the least. I was hoping for a bigger harvest since I planted 4 pounds. And yes, I hilled them up several times. Maybe not enough though. This made my harvest come in at about $0 .81/ lb. Not much better than what you can buy them in the store. But, they are fresh and clean, chemical-wise anyway, and they were very pretty and blemish free for the most part.
My other root veggies were so-so also. I got about 5 pounds of onions and 2 1/2 pounds of garlic. Not record setting, but an improvement over what I have gotten in the past. I think as the soil improves here through natural amending, harvests will get bigger. 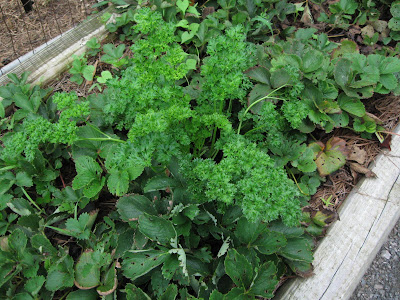 All of my herbs are doing well however, especially this parsley. Another blogger somewhere suggested growing parsley in with strawberries so I gave it a try. Seems to work! I have never done well with parsley but have harvested two large bunches from two of my plants already and should have much more if I want it. 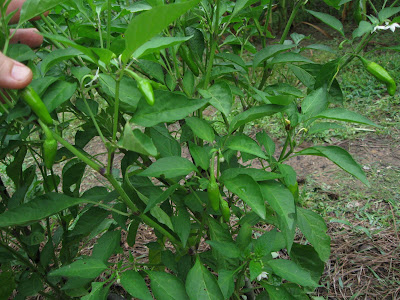 The pepperocini peppers are doing great!! Peppers do well here for some reason, any kind. I have pickled 4 pints of these so far. After I taste them in a couple of weeks I'll give ya'll the lowdown. 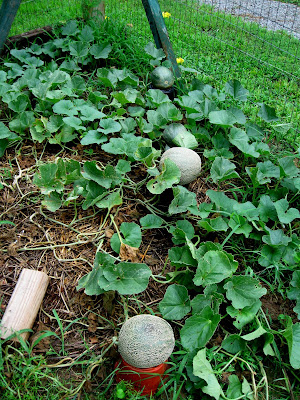 The cantaloupe are doing well, at least by my standards. I have not had much luck with melons in the past but these are doing well so far. I harvested one small one yesterday that had ripened and it was sweeeet! Hopefully these will hang on. I hate to say this because i know the conditions of some parts of the US but we have had quite a bit of rain this past month and I'm afraid that with it and this humidity I might have some fungus problems in the garden. I have set each melon up on a plastic pot to avoid the wet ground and this seems to work. 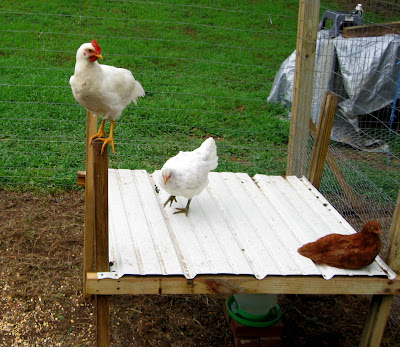 This little crap has started to crow. It's pretty pitiful but they are trying. He started belting out the other morning and every chicken in the place stopped dead silent and looked around. They were like, "what the hell was that?" He strutted around anyway as if to say, "yeah, that's me! I'm bad! Uh-huh". 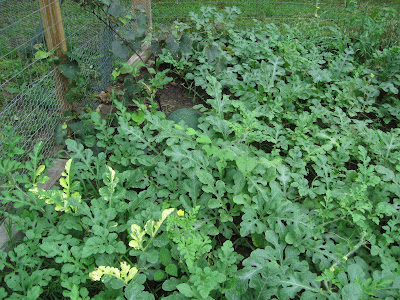 And watermelon!!! One big one so far and lots of little ones. These are Black Diamond and I have no idea how big they are supposed to get. Guess I could read the seed package. Or one of you could tell me if you have grown them yourself! I would say this one is pushing 15 pounds.
Posted by MamaHen at 9:02 PM

Whata lovely garden. An yore definition of "mess" as in a "mess of okra" is perfect!

We has two garden problems--the fungus ya fear, cause we is realy really humid. But what has me hoppin' mad is that some critter is eartin' mah tomatoes! I mean, chomps, not nibbles.

I spent 70 days growin' the loveliest plants yet, the tomatoes were big but still green--hard green, then I go out a dew-thirty one mornin' an somethang done took a wallopin' big bite out of every green tomato of any size! Oh I'se madder than stirred nest of hornets.

Doan know if it be a possum, a rat, a raccoon--SOMEthang I'se luv to pop wif' a BB gun.

But thas' mah sad garden story...so natcherly, YORE graden done made be jealous! But I'se so happy fer ya.

Thanks for the green thumb report!

Hey ER, what you call cantaloupe we call "rockmelon" lol. LOVE the pot under them idea, going to have to adopt that for my backyard, thanks:)

Man, that haul from the garden looks way too good for me!

I could live off of stuff from the garden, eating it every day! But then, that's the whole idea, right?

Hey Annie, the garden is looking pretty good. Looks like you're living off the land to me. BTW the definition of mess up here in Canada, is Frugal Canadian Hermits shack. Now that is a mess.

Everything looks so tasty! I have eaten Black Diamond watermelon ONE time in my life. It has been just plain deprivation ever since. It was so good. I can remember it like it was yesterday. We were out for a country drive and next to the road there was a old fella sitting in the shade of a canopy attached to his pickup truck. Also sitting in the shade were gorgeous fruits and vegetables. So of course we had to pull over. I know the watermelon were big, but I really can't put a weight to them. He said they were called Black Diamond. Just plain yummy!

I love peppers, just about any kind. Being from Texas originally I really miss my Mamaw's (granma) battered okra so my mouth was watering.

I don't know how it works on different species but jalapeno and anihiem get really hot the less you water them. we've been in a drought in Co for a loooooong time so I have learned to like really hot pepers. EVERYONE here has their own super secret family recipe for green chili. We even have a chili festival in may. It's huge. The competition for chili awards are cutthroat. Just a bit of trivia.

Hey Aunty! Wooooo, I'd be mad as an old wet hen too if somethin' bit my maters like that!! lol! I can't imagine what would do that and not eat the cherry maters.
I shall let you know about the melons and thanks for your kind words!

Hey FC! thanks to you too!!

Hey Molly! Rockmelon! that's interesting! No problem on the pot idea; I saw it in a book somewhere. ;)

Hey Jim! thanks man! Yeah, we are eatin' pretty good right now! If them damn melons would just get ripe!

Hey Mark! LOL! I died laughing at your 'mess' remark! Thanks! I needed that!

Hey Erin! yeah, I read that the Diamonds were a very old type and very sweet. I can't wait!! I just hope I don't screw them up.

Hey Dan! Oooh, a chili festival! Sounds great! I'm not much on really hot peppers but I LOVE pickled peppers of various kinds.