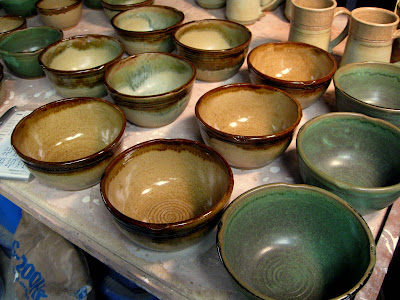 In keeping with the new year I've been experimenting with some new designs and new glazes.  I'm not sure what it is but lately I've felt a very renewed sense of creativity and action.  Whatever it is, let's hope it continues!  I think part of it is that we have been making some progress on the homestead.  Things are starting to come together in that realm and I really feel that this is the life I am meant to have.  No, things are not all roses and daisies (I'll explain later) but I feel good about our food production, my art production and just things in general.  We are even working towards adding active solar elements to the house.  More about this later too. 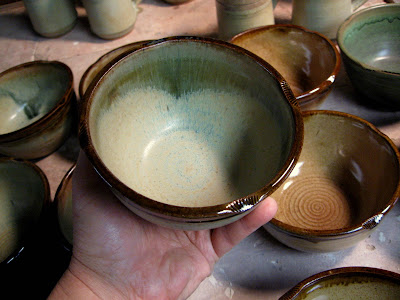 This is a "new" glaze that I really like (the inside color, not the dark rim).  Actually, it is partially a mistake.  See, I have a standard oatmeal colored glaze that I use quite a bit and so I ran out recently.  Well, there are literally hundreds of glazes out there with the name Oatmeal.  I had 2 written down in my books and, you guessed it, I mixed the wrong one.  The recipes look very similar but produce a noticeably different glaze.  And the bad thing is that the one I made this time is not suitable for dinnerware.  Well, I had 5 gallons of it now and had to do something.  I got to thinking and knew that I also had about 3 gallons of a slate blue that I had decided to retire.  It wasn't very popular anymore and I had tired of it.  So...what if I mixed them?  I did (reserving a little of each glaze separately) and it came out wonderful!  Plus, the elements of the slate glaze brought the finish of the new glaze up to where it would be suitable for food use.  I am going to try to compare the two recipes and see if I can combine the formulas to make this glaze now, instead of always making 2 glazes and mixing them.  I really hope I am successful.  So, that was a good save and nothing was wasted.  But now, I need a name for it!  It sorta, kinda, vaguely resembles an ash glaze so I had just thought about Blue Ash.  That's kinda boring.  The stores where I sell my work likes for me to name the glazes fancy stuff, like Paprika and Oatstraw.  You know how they are nowadays about colors.  But hey, as much as this lady sells, I don't care if she names them Chickenshit.  So, any ideas? 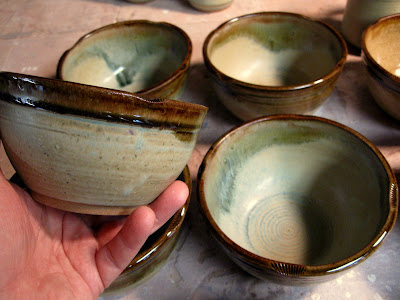 Speaking of pottery and stuff, it was brought to my attention that the email address I have had on my pottery page has been dead for some time and I had forgotten!  So, if you tried to email me at that old Hotmail address, I didn't get it!  I closed that account several, several weeks ago and just forgot to change it there.  Please forgive me if you've been trying to get a hold of me there.  I did send out an email change notice to those of you I correspond with and hope everybody got that.  But if not, my email is now ann.beaird@gmail.com.  It is also listed under the About Me header.  I hope no one has been emailing me and think I've been ignoring you.

I will also continue updating the cupcake situation in the posts here.  As of today, Rurality is out!  I may have some company later on and I will stuff a few cupcakes down them to try to speed things up!

*Update!!!  Allen came by and scarfed down some more cupcakes!  This is really getting interesting!  OK, those eliminated this time are...


Peg on Vancouver Island, Lisa in Bammer, Beatrice, Tammy (Grendal fan) and Dan.  Sorry guys.  But this is kinda fun!  OK, (smack, smack) and FloridaCracker.
Posted by MamaHen at 12:59 PM

Quite often the things I made in HS ceramics I glazed with whatever was in the leftover glaze jug. Part laziness and part wild streak. Sometimes very cool surprises came out of the kiln.

Annie that new glaze is very nice, but as for a name, I don't have a clue. Somehow Blue Ash sure sounds better to me then names like paprika or oatstraw and, yes even better than chickshit. WOW I will be checking for updates on the cupcake eating cause I didn't see my name as being out of the running...very eggciting!

I LIKE Mountain Smoke, or Spruce Fog, or Pine Frost. It does have a mountainy, foggy morning kind of feel, very pretty.
Eat more :)

Hey IR! hhmm, not bad. That's kinda funny because the original slate blue I made this from was renamed Mountain Mist. :D

Hey Erin! Yes, that green is very popular; I like it too. Yeah, I make a leftover or trash glaze too occasionally. They can sometimes be quite interesting.

Hey Bea! Oop! Sorry; your cupcake did come up empty. I think Allen is the one that ate yours!

Hey Page! ha! I'm trying!! I just can't eat anymore!!! lol!! Even Jack is slowing down and he has a major sweet tooth!
I like Pine Frost! Or maybe Sea Foam??

i would call the glaze "nebulae" because it looks kind of like well, a nebulae in the space photos...it is very pretty. but thats not catchy marketable to i would go with Thunderstorm. hell i dont know. LOL

i already saw i got eliminated. boo.

I am really pleased about how well your homestead is coming along. I am working on mine alone -and without much skill or way to do big labor. My husband is "city" and only comes to chickory to chill and de-stress.

Hey Chic! Yeah, I got the impression that you had to work on your place by yourself. The skill can be acquired though!

I was trying to think of what I would like this year. I would like to have a job I actually liked. I have never in my life liked any job I've ever had and I even had a few of my own enterprises. I hated owning a pizza parlor least. I'd also like more money and less fat. Last year was the other way around.

I want that cup dang it. Jacks a piker. Even if I was sick, I could have eaten thirty two of those cupcakes by now. My son could do that and cry when they ran out.LOL I guess Jack's trying to keep his figure for the wedding.

Love the new glaze! Hate that I got eliminated from the running for the cup though. Thanks for doing this - it was fun!

Hey Dan! Yes, you should definitely have a job you like! especially after all this time, man. I heard someone say once, "remember what it was that you liked to do when you were six and then do that for a living." Now, that sounds funny at first and requires some thought to see the true idea but it works! Go for it!
You're right about Jack! He gained some weight over Christmas and was horrified so he's trying to cut back! lol!

Hey Lisa! Yeah, I hate that everybody can't win! thanks though! glad everybody has enjoyed it!